What are we doing?
Here are brief descriptions of some of the areas we have been working on in recent years. See also [publications] 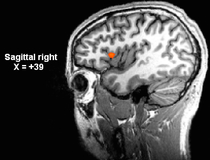 Semantic 'gaps' in Sentence Comprehension
How are sentences understood? And, more specifically, how do we attain the meaning of a sentence? At first, one might think that this simply requires understanding the sentence's individual words and how they combine. But oftentimes sentences have semantic 'gaps'. For instance, a sentence such as 'the boy finished the letter' might be understood as 'the boy finished [reading] the letter', while in reality the sentence could be about anything (even 'eating' the letter). Usually we understand these sentences in context, but some believe that regardless of context, there is a 'default' interpretation. We are investigating the default hypothesis (called 'coercion') using a variety of techniques and also advancing theoretical work aiming to understand the mechanisms responsible for filling the gap in--whether by contextual information (e.g., pragmatics) or whether by default semantic change ('coercion'). The illustration depicts partial results from an fMRI experiment showing right hemisphere involvement in sentences such as 'the boy finished the letter', suggesting that pragmatic processes are recruited in the interpretation of these sentences (see de Almeida, 2004), beyond their recruitment in other, fully specified sentences (such as 'the boy read the letter'). (See de Almeida & Riven, 2012, for discussion, and de Almeida, Riven, Manouilidou, Lungu, Dwivedi, Jarema, & Gillon, 2016, for a full set of results [link to article]). Two recent articles, one with Ernie Lepore (Rutgers University), and one with Caitlyn Antal, discuss theoretical issues related to this topic.

The Nature of Concepts
Concepts are the most elementary mental representations bearing meaning. They enter into other higher cognitive processes such as thoughts (in fact, thoughts have concepts as their constituents just like sentences have words as their constituents). But how are concepts represented in the mind/brain? How do you represent, say, the concept DOG? Is it represented as a set of features (for instance, +barks, +animal, +domesticated, +furry)?  How are concepts tied into categories?  We are currently investigating the nature of concepts by looking at how verbs "behave" in certain types of sentence contexts. Some people think that certain classes of verbs are represented in the mind by a "conceptual template" that specifies the nature of the arguments of the verb together with its conceptual primitives. For instance, some people think that a verb such as kill (as well as other verbs similar in meaning, so-called causatives) is mentally represented by a conceptual template such as [[x ACT] CAUSE [y BECOME [dead]]] which contains primitive predicates (e.g., ACT, CAUSE, BECOME) and argument positions, x and y, specifying the kinds of elements the verb requires to form a grammatical sentence; the one who 'acts' and the one that 'changes state'. We are investigating this hypothesis with causative verbs, employing  different types of experimental techniques (memory for sentences, eye tracking). The figure shows results from a study by de Almeida & Turbide (2014, submitted) suggesting that causatives are not more complex than other verb/concept types. A current discussion on conceptual atomism appears in several chapters of a recent book (de Almeida & Gleitman, 2018  [link to Oxford])

The Language-Vision Interface
During the past couple of years we've been developing a series of studies on the interaction between linguistic and visual representations during language comprehension. These studies investigate, more specifically, how verb-semantic information may constrain the domain of visual attention to referents in the scene. Two theses (Di Nardo and Van de Velde) have explored this interface, both employing dynamic scenes and different verb classes. A paper has been published (de Almeida, Di Nardo, Antal & von Grünau, 2019). The figure illustrates results from one of these studies--showing that causative verbs yield faster---but not anticipatory---saccades (eye movements) to semantically related objects in the scene compared to verbs of perception. Current study with graduate student Deborah Martin employs this technique in the investigation of language and visual attention in children within the Autism Spectrum Disorder. 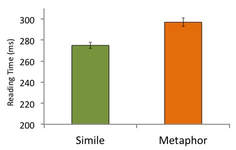 The Nature of Metaphors
Several studies with former graduate student Carlos Roncero focus on the representation and processing of metaphorical expressions (e.g, My lawyer is a shark). The studies employ different techniques (e.g., eye-tracking, priming, judgments, corpus data) and populations (healthy young adults, Alzheimer's patients). Metaphors are said to involve an "alternative meaning", one that goes beyond what is literally said. The current thinking is that because, say, lawyers cannot really be sharks, the interpretation of a word such as 'shark' involves the access to another meaning—sometimes even directly, without first accessing what it really means (viz., some kind of fish). In a recent eye-tracking study, we have shown that a metaphorical expression takes longer to process than an expression with the same basic constituents but conveying a (literal) similarity (such as My lawyer is like a shark). Our suggestion is that metaphors are not accessed directly qua metaphors but require the computation of the actual (literal) meaning. The graph shows partial results from one of our eye-tracking studies (Ashby, Roncero, de Almeida, & Agauas, 2018 [link to article]), with total reading time on the vehicle  words ('shark'). A set of norms for metaphor and simile properties has also been published recently (Roncero & de Almeida, 2015 [link to article]). A recent study has investigated the interpretation of metaphors by Alzheimer's patients (Roncero & de Almeida, 2014 ​[link to article]). Current related studies, with graduate student Iola Patalas, involve eye-tracking and priming techniques.

Lexical Structure in Word Recognition
How are words processed and represented in the mind? Regarding the structure of words, some people believe that we recognize and process words in full form while others believe that we recognize words by first breaking down their constituent morphemes (e.g., when you see a word such as remaking, you first decompose it into re, make, and ing). Together with Gary Libben (Brock University), we have been working on the nature of the lexical recognition and access codes employing different types of morphologically complex words. Our projects include experiments with inflected (e.g., barking) and compound (e.g., keyboard) words, as well as morphologically complex ambiguous words (e.g., undoable), and employ several experimental techniques (eye-tracking, priming, RSVP, etc.). The graph depicts results from a study by Libben & de Almeida (2002) showing priming effects for words containing ambiguous roots (bark) and their disambiguating associates (e.g., barking-dog, barking-tree). Negative priming of tree by barking suggests that the root bark is accessed independent of the full word barking (download .pdf). Current studies on morphological processing, with Gary Libben (Brock University), employ eye-tracking and other techniques. 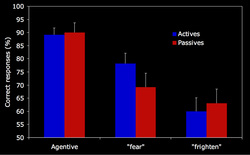